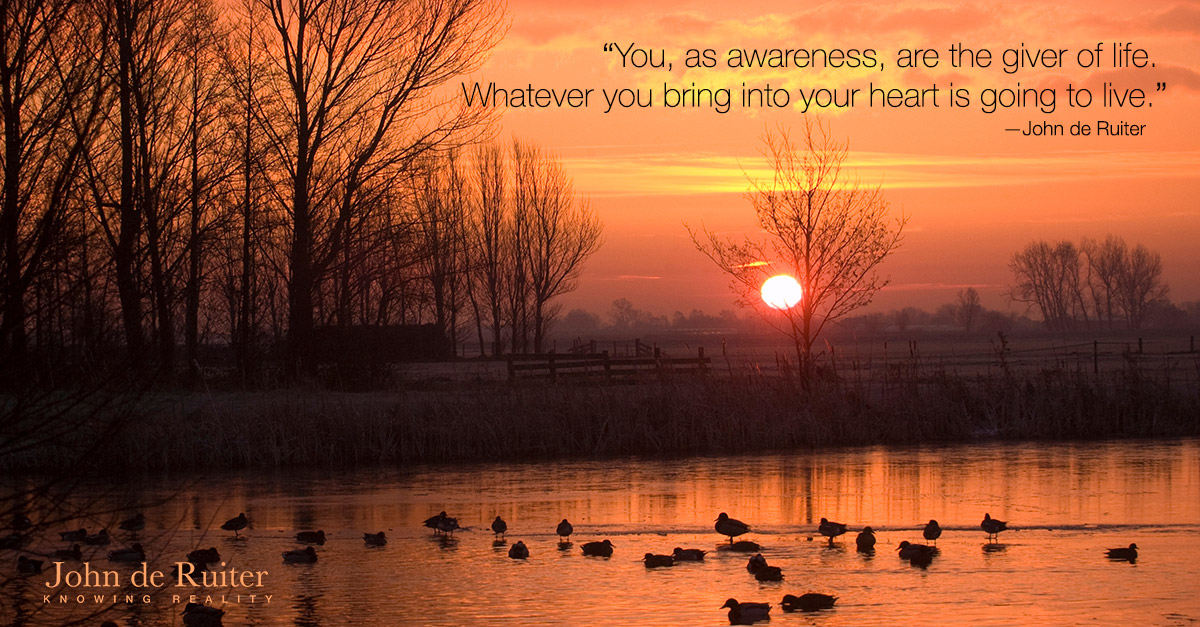 A Shift in What is Human

Q: John, I remember you said for me to gather up all the different seeds of awakening that I’ve been in and to be staid in them. In the meeting it felt like everything gathered in, and it was like I was in my perfect body of knowledge. There was no connection anymore with the stains in myself. My whole perspective was turned inside out and I was in this perfect body of knowledge, and when I’m in it, I see that even when I drop out of it, that the body of knowledge is perfect. When I’m in it, there’s this life to move in. When I spoke with you that afternoon I was in this deep level of love, and it was a kind of love that was about letting everything fall apart.

John: As the seeds of awakening grow from within your heart, they grow into your self, creating and manifesting a different order of self, one that matches the code and the movement of your own being. Anything in your self that is able to relate through tension will eventually be replaced. These seeds of reality, a deeper reality, are not of your self, but of your being. These seeds represent a self-version of your own being at present. They will be counter to how you normally experience your self. They represent a completely different way of relating, being, and moving than what you’re used to in your self. As you are staid in that, it takes the place of familiarity. By that, your being comes into ability within the level of your self. You will be able to move your being outside of your self. Your self comes into the form and the function of your own being, a complete shift in the evolution of what is human, and the emerging of a fundamental shift in reality.

Q: I feel as if my self can’t actually contain the resonance of that, but your speech awakens these seeds in us. It’s like you actually give us the seeds of our future selves.

John: I come from where you’re going. My movements directly awaken your knowledge of that. It takes you out of the stain in your self. You then experience in your self that you are no longer of those stains. The stains no longer have you. It’s when they don’t have you that they no longer hold. As long as the stains have you, you move by them; you feel and think by them. They continue to make your perception of reality, making your reality in your life different from your own being. Your movement in that separates you from your own being.

Q: The stains also remind me of blind spots. It’s the same thing, like when you were speaking about my blind spots in my marriage. I remember when I was experiencing tension with my husband, and I experienced you energetically kind of enter the room. It was like a goldenness came into my living room, and everything of that difficulty was gone. That’s the quality of the movement when I was in my perfect body of knowledge. It’s like a quantum movement as opposed to the normal kind of linear movement. It goes way beyond the self.

John: It comes into form on the level of the self. All of the function that you have as a self gives you an idea of how your own being is able to come into a full function that is comprehensible in your self. However you imagine it, that does give you an idea. You know the resonance.

Q: I can’t consult anything that I think or feel. My self is trying to advise me all the time.

John: Consulting your self in this is comparable to an engineer moving in his or her own expertise and then asking a child if the work is correct. There’s nothing wrong with the child, but addressing the child requires something of the child that the child isn’t capable of. It creates confusion.

Q: What’s the difference between how I move now or how I described to you all those years ago, just after I met you, those four days when I was just flowing and my being was coming through and it was affecting everything. How is that different now?

John: That was a precursor, and now it’s all there. What was moving as a precursor now completely belongs in what you’re stepping into. It’s a real part of what makes up your fundamental shift in what is, for you, human.

Q: When you say the word human, I really love it. There’s a quality to that word, a heart quality. There’s an intimacy to it. It’s like it’s really me, somehow. Can you say more about ‘human?’

John: It is your ability to reach into others that accomplishes in them a ‘yes’ that is a match to their own being. When what you are as human fundamentally shifts and holds, your movement as a self awakens others.

Q: Right now I sense that awakening others is more about not belonging to that network.

Q: By that do you mean that the movement of my being will be as intimate and natural and really there as the movement in my self now?

John: Yes, with the level of form and function that your self has. When a city is inundated with water, the water will move in all of the streets. Every pathway that has been made will be used. It doesn’t matter the reason of its making.

John: It identifies for others, not just within their hearts but within themselves, what they always knew the truth of and didn’t know how to do. The different kind of movement within old pathways directly administers ‘the how.’

Q: So, in a sense, as a group here, that’s what we’re learning to build.

Q: And I can really see that it’s started to happen in meeting with other people. We’re beginning to use those old pathways in different ways, more in the ways that we’ve been awakened to. And in the same you said to gather up all the different seeds of awakening, is there some way of gathering-up?

John: The gathering-up on a group level is the manifestation of what is unseen into the surface, comprehended within a person, moved within a person, while seen by others. As that keeps taking place, we all slowly comprehend with real form, real function, what is occurring here.

Q: So when someone is really moving in what they know, others can directly take that in.

Q: And this can only happen by knowing, if we know the truth of that.

Q: It reminds me of when you were speaking to a woman describing when she was in her 20’s and she was kind of heartbroken and just saying without knowing why, ‘I just want to go home, I just want to go home,’ and then finding a home in this. The other part of it is in gathering all of that together. The other day I wasn’t trying to gather any bit of it. It was as if I was gathering my whole body together. Is that just one way of gathering?

John: The movement of your own sexuality if your sexuality is directly connected to your being.

Q: How I’m understanding what you’re saying is that there’s something about sexuality, like a special connectivity between everything. Is that right?

John: It’s there to connect everything in your body that is just like your own being, bringing your being into physicality, not on the terms of anything understood, but on the terms of what you know the truth of directly.

Q: I feel I’m drawing that in very deeply.

John: Everything you have known the truth of, your body knows.

John: Your deeper-level relating is all coming together and coming into adolescence. Your function as a being is developing. As it does, it alters how you comprehend reality. This isn’t to put you into a direct doing. This addresses what you know. As that develops, then you know to, but not yet how. Be staid in this, and you’ll see.

Q: Thank you, John. I just really love the permission just to be staid in not knowing how, just knowing, knowing, knowing to and not knowing how. I want to just to share something I’ve always wanted to share with you, and it’s actually lyrics of a song that I heard years ago, and when I heard it, it was like, ‘that’s how I want to move.’ It’s a Leonard Cohen song and it’s these lyrics and it says: ‘I want to travel with him and I want to travel blind. And I know that I can trust him because he’s touched my perfect body with his mind.’ I just love that so much. I just love the traveling blind, the not knowing how to. When I heard that, I thought, ‘how does he know that? How does Leonard Cohen know that?’ Thank you, John.